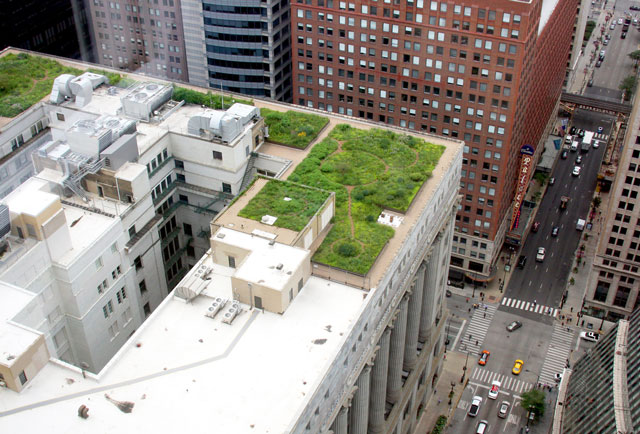 The City of Chicago planted a green roof on City Hall to reduce energy costs and improve local air quality. Photo by WBEZ/Flickr

There’s been a dramatic groundswell of “bottom-up” climate leadership from U.S. states, cities and businesses in the face of a federal retreat on climate action. From state legislation mandating cleaner electricity sources to city policies encouraging all-electric buildings, these local efforts can significantly reduce U.S. emissions, especially if they continue to grow.

A new report, Accelerating America’s Pledge, provides a road map for rapid and comprehensive U.S. emissions reductions based on these subnational efforts. The report finds that: 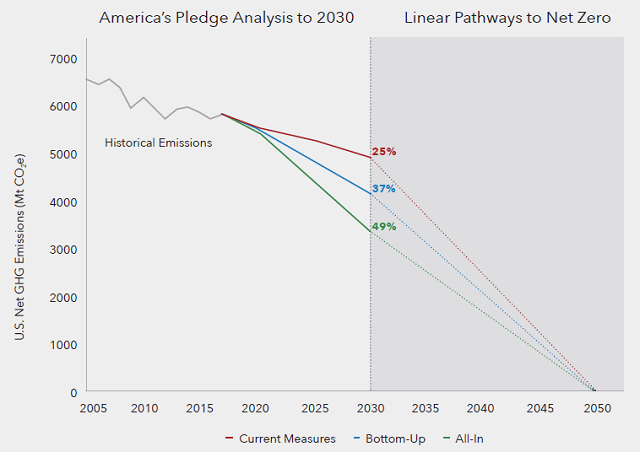 The America’s Pledge analysis features three scenarios to evaluate the U.S. emissions trajectory: 1) a “Current Measures” scenario including binding national and subnational policies currently in place; 2) a “Bottom-Up” scenario in which current cutting-edge climate policies on the part of states, cities and businesses are scaled up significantly; and 3) an “All-In” scenario which adds renewed legislative and executive action on the part of the federal government

The results imply that current measures would fall short of the original U.S. national climate commitment (known in the UN as a “nationally determined contribution” or NDC), yielding a reduction of 19% below 2005 levels in 2025 instead of the intended 26-28%. However, the report shows that heightened levels of climate policy ambition can meet or even exceed the original NDC, potentially placing the United States on a course consistent with what’s needed to limit global temperature rise to 1.5 degrees Celsius, the target scientists say is necessary for averting some of the worst impacts of climate change.

Achieving these levels of reductions will require concerted efforts at an unprecedented scale. Yet the building blocks are already in place in the form of concrete policies and actions that leading subnational actors have adopted in recent years. The America’s Pledge analysis synthesized data on current climate policies and organized them across three broad principles: decarbonizing energy supply, decarbonizing end-uses and enhancing ecosystems. Researchers used these principles as the basis for its two high-ambition scenarios.

For the “Bottom-Up scenario” (37% emissions reduction), current actions would be adopted on larger scales over the next decade, and states with positive track records on climate policy would adopt the most ambitious measures. In the “All-In scenario” (49% emissions reduction), federal regulatory and legislative actions would allow the rest of the country to reach similar levels of ambition. For example, renewable electricity would provide nearly 50% of generation nationwide by 2030.

Overall, the approach acknowledges that subnational actors can go quite far, but that more comprehensive reductions will require renewed federal engagement in the form of policies like a clean electricity standard, updated regulations on methane leaks from oil and gas, vehicle fuel economy standards, and rules to phase down super-polluting hydrofluorocarbons (HFCs).

Decarbonization Is Difficult, but Doable

The All-In scenario would require political prioritization of climate action and market transformation at a pace with few if any precedents in recent history. For example, the United States would need to add an average of 75 gigawatts of largely clean electricity sources (wind, solar and gas with carbon capture and storage) annually through 2030. This is more new generating capacity than was added in any year in recent decades. 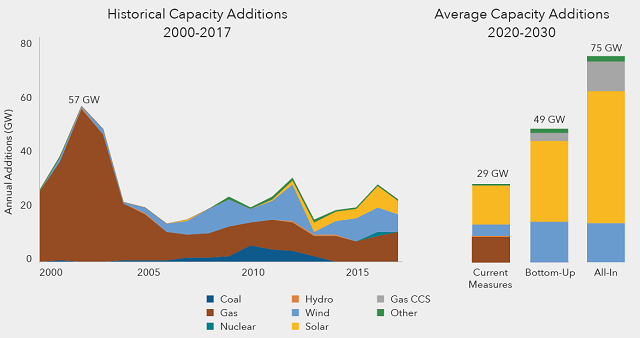 Pursuing greater emissions reductions may seem daunting, but recent years have illustrated how quickly ambition can be scaled up. A prominent example is the continued growth of the “coalition of the ambitious.” In the past year alone, the number of state and local actors committed to the Paris Agreement has grown to 68% of the U.S. GDP, 65% of the population and 51% of emissions. Were this coalition a country, it would be the second-largest in the world by GDP (second only to the United States itself).

Commitments to reduce emissions are only important if they are backed by concrete policies and measures. Fortunately, there is good news on this front as well. The number of states enacting 100% clean energy legislation has grown to cover 16% of the country’s electricity demand, doubling the share from 2018. Including those states that have proposed 100% clean electricity through executive orders, the share would rise to 27% of demand. Additional initiatives, ranging from electric vehicle fleet procurement to legally enforceable carbon caps for the power sector, are also gaining traction. 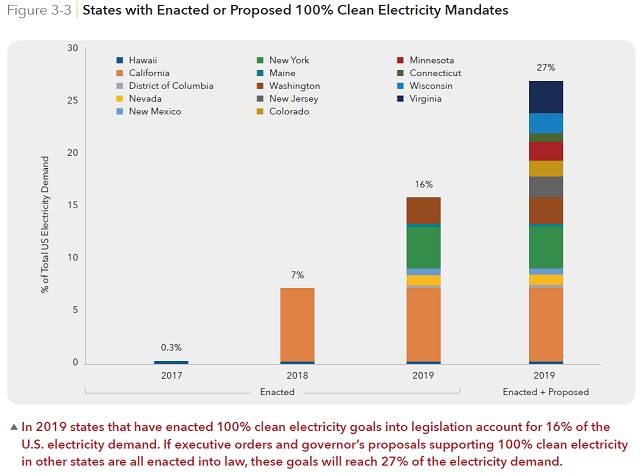 A Critical Moment for the U.S. Climate and Economy

Accelerating America’s Pledge also examines the socioeconomic effects of pursuing the All-In strategy. If planned well and done right, this level of climate ambition can reinvigorate American communities, industries and landscapes. Technologies that are important for decarbonization ‒ such as wind and solar energy, electric vehicles and electric heat pumps ‒ are rapidly becoming cost-competitive with their fossil fuel competitors. The transition will also create new opportunities in the industries and careers of the future, including renewable energy, building retrofits and energy storage. Decarbonization would also provide benefits to air and water quality, human health and ecosystems. Since 2010, the retirement of 270 coal plants has already helped avoid 7,000 premature deaths from air pollution in the United States. In the All-In scenario, the health benefits of improving air quality just by lowering coal and gas electricity generation would prevent an additional 5,700 premature deaths annually and have an economic benefit of $26 to $58 billion.

The United States faces a critical juncture on its path to reducing emissions. Over the next decade, the pace of decarbonization nationwide must be accelerated in order to achieve international commitments and avoid catastrophic increases in global average temperature. The achievement of these goals hinges on how quickly current policy momentum can be scaled up and whether action will be implemented solely by subnational actors, the federal government or both. Accelerating America’s Pledge provides a blueprint for emissions reductions at a pace that is ambitious, but attainable if we go all-in.

America’s Pledge is a collaborative effort between the leadership of the America’s Pledge initiative and a core research team including University of Maryland, Rocky Mountain Institute, WRI and other partner organizations.

Joel Jaeger is a Research Associate for the Climate Program at World Resources Institute.

Kevin Kennedy is a Senior Fellow for the U.S. Climate Initiative at World Resources Institute.