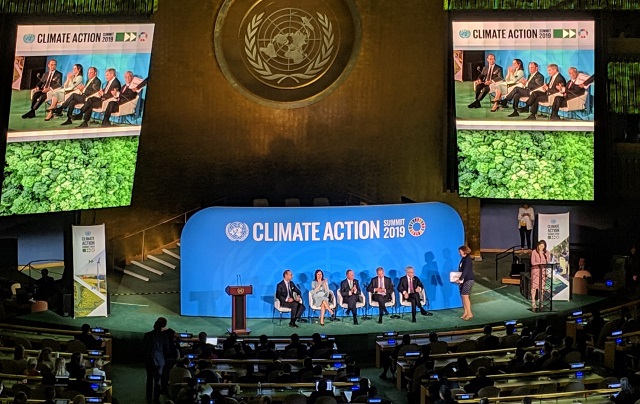 “I’d like to hail the Zero Carbon Buildings initiative that will be launched this week. It’s a very good initiative,” said Mayor of Montreal Valérie Plante at the UN Climate Action Summit. Photo by Emma Stewart/WRI

The UN Climate Action Summit in New York this week saw strengthened national climate commitments from 67 countries, but a disappointing showing from the world’s major economies. As national governments fall short, cities must continue to be climate champions. Indeed, as new research from the Coalition for Urban Transitions shows, low-carbon urban development is a $24 trillion opportunity just waiting to be tapped.

Zero Carbon Buildings for All

Building operations are responsible for 28% of global energy-related emissions. Fortunately, improving the building stock is a ready and cost-effective means to decarbonize global cities. To meet Paris Agreement goals, all buildings must be net zero carbon by 2050, but fewer than 1% of buildings are today. Closing this gap will require dramatically enhanced ambition and execution of more efficient buildings and renewable energy supplies.

“When it comes to climate change, we need to shift from ‘doing better’ to ‘doing enough,’” said Andrew Steer, President and CEO of World Resources Institute. “This requires reducing emissions to net zero by 2050. Decarbonizing buildings is absolutely essential to attaining that.”

All buildings must be net zero carbon by 2050 to meet Paris Agreement goals, but fewer than 1% of buildings are today. #ZeroCarbonBuildings for All is the first major initiative to scale up solutions to bridge this gap. Learn more: https://t.co/Hmm1RAoEzd #ClimateActionSummit pic.twitter.com/5PlJucpro1

Zero Carbon Buildings for All, a new multi-partner global initiative launched at the summit, was endorsed by Kenya, Turkey, the United Arab Emirates, the United Kingdom, the mayor of Montreal and a host of partners, including WRI. Naoko Ishii, CEO and Chair of the Global Environment Facility, announced $2 million in new support for the initiative.

“Kenya is committed to joining the Zero Carbon Buildings for All initiative with a view of implementing sustainable affordable housing programs and urban regeneration as part of our country’s Big 4 Agenda through integration of green building practices in the policies, regulations and standards at national and subnational levels,” said James Wainaina Macharia E.G.H., Cabinet Secretary of Kenya’s Ministry of Transport, Infrastructure, Housing, Urban Development and Public Works.

Zero Carbon Buildings for All will leverage the leadership of government, industry and civil society to both secure commitments to ambitious targets (national policy roadmaps to decarbonize new buildings by 2030 and existing buildings by 2050) and mobilize significant funding (at least $1 trillion in Paris Agreement-compliant buildings investment in developing countries by 2030).

WRI Ross Center is also part of a key transport initiative announced at the summit, Action Towards Climate-friendly Transport (ACT). ACT will deliver a holistic sustainable transport approach that reflects the Avoid-Shift-Improve Framework:

Transport is responsible for 28% of energy-related greenhouse gas emissions. If we continue with business-as-usual scenarios, transport emissions will double by 2050. The challenge is daunting: catering to the fast-growing demand for mobility and transport, while slashing emissions; increasing climate resilience, while promoting social and economic development.

WRI will support ACT through SURGE (Supporting Urban Reductions in GHG Emissions), a project encouraging the mass rollout of electric buses. Through a five-year technical assistance program and city-to-city mentorship, we aim to support 500+ cities to deploy 100,000 e-buses. This would represent a 20x increase in the current number of e-buses outside China.

WRI Ross Center is contributing to the Building the Climate Resilience of the Urban Poor Initiative, co-led by the governments of Kenya and Brazil and supported by a coalition of organizations. The initiative aims to help 150 million urban poor living in informal settlements in at-risk cities adapt to climate change by 2023, and 600 million by 2030.

WRI experts contributed to the Global Commission on Adaptation’s flagship report, Adapt Now: A Global Call for Leadership on Climate Resilience, with a chapter highlighting the urgent need for climate adaptation in urban areas. These cities face annual climate damage costs of more than $1 trillion by mid-century, with disproportionate impacts on vulnerable groups. In coastal cities, the cost of good adaptation is one-tenth the cost of no action.

To deliver more resilient urban services while tackling poverty and inequality, cities must invest in better climate risk information, technical capacity, nature-based solutions and upgrades to the living conditions of the 880 million people living in informal settlements that are highly vulnerable to climate change today.

Building on the launch of the Coalition for Urban Transitions’ flagship report, Climate Emergency, Urban Opportunity, WRI Ross Center is supporting the push to put cities at the center of national climate plans. The Coalition report finds significant economic, social and environmental benefits for national governments that invest in zero carbon cities. Investments in zero carbon cities present a $24 trillion opportunity and could reduce emissions from cities by 90%, while creating 87 million jobs per year. By taking an active role in supporting sustainable development in cities, national governments around the world can both drive economic prosperity and address the global climate emergency.

#Cities of the future will be:

This is the new #UrbanOpportunity. National governments have much to gain from investment in zero-carbon cities. More from @NCEcities’s new report: https://t.co/Lrw897ZBdO pic.twitter.com/MpD32HhOgX

“Cities are engines of growth, innovation and prosperity,” said António Guterres, Secretary-General of the United Nations. “This report shows how the right investments can build sustainable and livable cities and communities that will help us achieve the Sustainable Development Goals and the objectives of the Paris Agreement. It is possible and realistic to realize net-zero urban emissions by 2050. But to get there, we will need the full engagement of city governments combined with national action and support.”