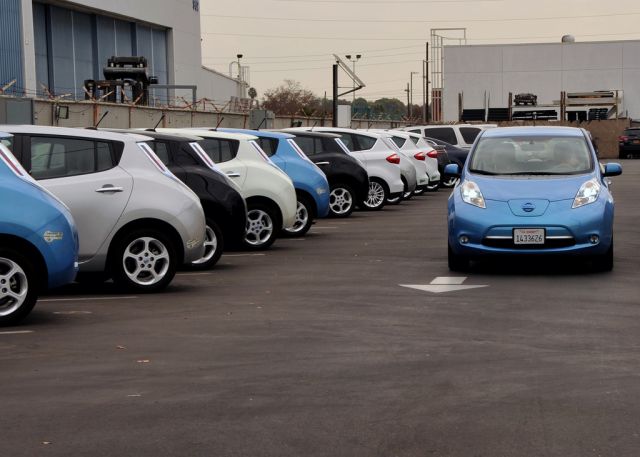 In 2016, the U.S. Air Force offered a vision of the future for the transportation and energy sectors when the Los Angeles Air Force Base became the first federal facility to replace its entire ground vehicle fleet with plug-in electric vehicles (EVs). More consequentially, their EVs became the first in California to provide vehicle-to-grid (V2G) services, where the batteries in electric vehicles can send energy back to the grid, enabling cleaner, more efficient, more reliable power. As millions of Californians face repeated blackouts to avert wildfires or because of them, the state should follow the military’s lead and develop ways for its growing fleet of EVs to ensure resilient power to communities and critical facilities – especially during outages.

A typical electric car has a battery that can hold about 60 kilowatt hours (kWh) of energy, enough to provide back-up power to an average U.S. household for two days. California-based electric bus manufacturer Proterra offers its Catalyst E2 Max model with a 660 kWh battery. That’s enough to keep power on in shelters, emergency response centers or other key areas of need during a disaster. As California continues its progress towards mass adoption of EVs, the energy storage potential of these vehicles becomes even more profound. If the state meets its goal of having 5 million EVs on the road in California by 2030, they would possess approximately 250 million kWh of energy storage, enough to provide back-up power to all of San Francisco for about 14 days.

An Advantage During Emergencies

Many solutions will be needed to reduce the risk of catastrophic wildfires sparked by high winds blowing vegetation into electric lines and intensified by the effects of climate change. Trimming trees, burying power lines underground, and relying more heavily on solar-powered microgrids that can operate independently during disruptions will all be part of the mix. The opportunity to use the energy storage capacity of EVs has received less attention. That should change. While the obvious fact that EVs are mobile makes it more challenging to use them for grid services compared to stationary batteries during normal grid operations, this becomes an advantage during emergencies. A fleet of electric buses with V2G capability, for example, could be deployed to critical locations during red flag warnings before transmission lines are powered down, and EVs could quickly restore power to critical infrastructure in communities that are blacked out as a result of fire or storm damage to transmission lines.

The technologies needed to use EVs as back-up power systems exists today, in part due to the work at Los Angeles Air Force Base and related investments by the California Energy Commission. Nissan has commercialized its LEAF-to-Home system, which will allow customers to use their Nissan LEAFs to power their homes during outages. Honda has announced plans to release a similar product next year. BMW and Mitsubishi have also participated in demonstration projects, using similar technologies. Proterra has released a V2G-enabled transit bus, and BlueBird is working with others to launch a V2G school bus demonstration in California. These are just a handful of examples of how the transportation and energy sectors are converging towards a more sustainable future.

While additional investment is important to further mature V2G technologies, the bigger shortfall is in basic logistical planning for emergency response. State and city officials should begin work today to define plans and protocols that leverage the growing fleet of EVs to prevent future blackouts and better respond to disasters. Resources should be aligned to invest in the infrastructure to make this future possible. California leads the world in the fight against climate change and is largely responsible for the global proliferation of electric vehicles. Taking the bold step of treating EVs as energy storage assets, California can show the world that adapting to climate change can be part of the path to preventing it.