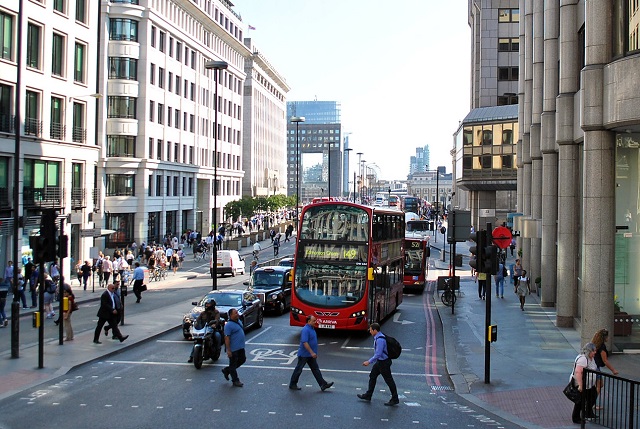 London has adopted strict regulations to limit vehicle use in the city center, opening the streets for people, bikes and electric buses. Photo by Jason Mientkiewicz/Flickr

In 2003, London followed the example of Singapore and launched a congestion charge, requiring drivers to pay £11.50 ($15.90) to enter the city center and becoming a global example of how this innovative but sometimes fraught policy can work. Sixteen years later, again ahead of many other cities, London has added an additional charge that specifically targets the worst polluting vehicles.

Starting April 8, 2019, a light-duty vehicle driving in a 13-square mile area of London’s downtown must meet strict Ultra Low Emission Zone (ULEZ) emission standards or pay an additional £12.50 ($16.27) on top of the normal congestion charge. Heavy-duty vehicles that don’t meet the new emission standards must pay an additional £100 ($130). Unlike the congestion charge, which is in effect only on weekdays, the ULEZ operates 24 hours a day, seven days a week, year-round. And the city plans to extend the zone in 2021.

Charging polluting vehicles is part of a comprehensive air quality improvement strategy by the city aimed at curbing asthma and heart and lung diseases. Transport accounts for half of the oxides of nitrogen (NOx) emissions, which in turn contributes to ground-level ozone and particulate matter as the gas reacts with other parts of the atmosphere. These pollutants mainly affect the health of children. More than 2 million people, including 400,000 children, currently live in areas of London with unacceptable levels of air pollutants.

One study from King’s College London and Imperial College found that an average of three adults and one child are hospitalized every day for asthma associated with the city’s air pollution. Researchers further indicated that 1 out of 10 hospital admissions for children’s asthma in London are directly associated with poor air quality.

Mayor Sadiq Khan is also improving bus and taxi emission standards and promoting walking and cycling with safer infrastructure and a variety of incentives. Since the launch of the ULEZ, all buses traveling through the city center must meet or exceed Euro VI, the European Union’s latest emission standards, reducing nitrogen oxide emissions up to 95%. This includes a combination of electric buses, hybrid diesel-electric buses, new diesel Euro VI vehicles and upgrading other buses to meet Euro VI standards using emissions control technologies.

London already has 150 electric buses. And in 2020, all conventional single-deck buses will be zero emission at tail pipe, using a mix of hydrogen- and battery-electric buses. These buses improve not only air quality but passengers’ travel experience, since they have a quieter, smoother ride.

The implementation of the ULEZ followed a lengthy, comprehensive consultation with stakeholders and community representatives, as well as a public debate process. The majority of Londoners support its implementation, and some even want the government to move faster in promoting zero-emission and shared vehicles.

Certain businesses, however, oppose the ULEZ. The Road Haulage Association, for instance, says the ULEZ places them between a rock and a hard place, since many of its trucks only meet up to Euro V standards. The Association has requested support in replacing its trucks and announced that it will stop service to central London if they can´t upgrade their trucks.

London has been a leader in improving sustainable mobility over the last three decades. Between 1993 and 2014, the city reduced car use by 8%, increased walking trips from 23 to 28% and bicycle trips from 1 to 3%, and kept public transport use stable, with 30% of residents using public transport daily. This was the result of multiple measures, particularly the congestion charge, the improvement of public transport with priority access, fare integration, and the construction of safe infrastructure for pedestrians and bicyclists. All these measures are being reinforced with the ULEZ and the current air quality strategy.

When London introduced its congestion charge in 2003, many thought that other cities would quickly follow suit. But widespread adoption has been disappointingly slow. Only Milan (Italy), Valetta (Malta), three cities in Sweden, and very recently, New York, have implemented their own congestion charges since.

Adoption of London’s new ULEZ by other cities may be similarly slow. The cases of Hong Kong, Edinburgh, West Midlands, Greater Manchester, Bogotá and pre-2018 New York show the strong opposition to economic demand management measures that can arise, even when they offer important improvements to public transport.

Deepening concerns over air quality, though, are putting pressure on the status quo. The World Health Organization estimates that 4.2 million people die every year as a result of exposure to ambient air pollution, and 91% of the world’s population lives in places exceeding WHO air quality guidelines. Ambient air pollution comes from many sources, but transport is a major contributor. If implemented alongside other measures promoting sustainable mobility and zero-emission vehicles, pollution charges can result in better cities for all.