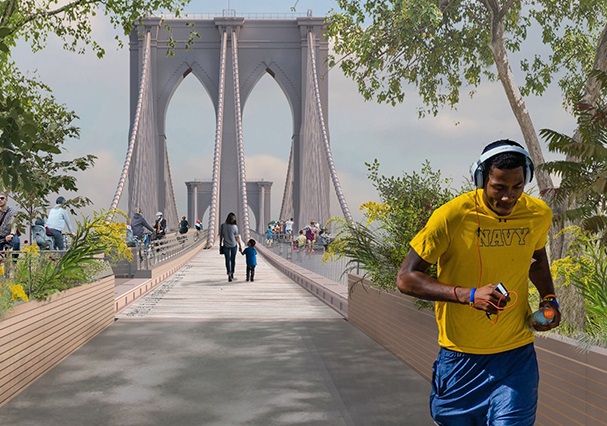 The Brooklyn Bridge, with its distinctive gothic towers and cable-bound span, is one of the most recognizable landmarks in the world. It features in countless films, photographs, books and TV shows. It even has its own idiom in American parlance – when someone is “selling you the Brooklyn Bridge,” they are offering you a deal too good to be true. Some New Yorkers may even feel that it describes their experience of the bridge itself.

Despite its famous charm, the Brooklyn Bridge is often crowded, with grimly resolute commuters vying for space with meandering tourists. Only a thin, painted line separates cyclists and pedestrians squeezed together at dangerous pinch points.

That’s why the New York City Council and Van Alen Institute launched Reimagining Brooklyn Bridge – an international design competition to make the bridge safer, more accessible, and more sustainable. After reviewing more than 200 proposals from 37 countries, they selected our project, led by Scott Francisco of Pilot Projects Design Collective, Cities4Forests and the Wildlife Conservation Society, as the winner.

Our design, like many of the other excellent proposals, features a dedicated bike path, new “lookout” platforms to alleviate pinch points and added greenery. But unlike other designs, the heart of our Reimagining Brooklyn Bridge proposal centers around the use of a special material that can assure rural livelihoods, safeguard threatened cultures, protect endangered species and fight climate change.

Our Brooklyn Bridge Forest will restore the bridge’s pedestrian promenade with sustainably-sourced tropical hardwood originating from a community-managed “partner forest” in Guatemala’s Maya Biosphere Reserve. Our effort is part of a larger movement where urban residents acknowledge that tropical timber and other commodities from faraway forests play a huge role in our lives, even when we aren’t aware of it. Building new partnerships to cultivate and source those materials sustainably can enrich the lives of everyone involved.

Tropical hardwood species, such as manchiche and pucte, are particularly well-suited for outdoor urban infrastructure. Many are extraordinarily strong, resistant to decay and grow tall and straight enough to produce boardwalk planks.

The last time the Brooklyn Bridge promenade boardwalk was replaced, the city’s Department of Transportation used a wood called greenheart (Ocotea rodiaei or Chlorocardium rodiei), which grows in northern South America. However, that wood was procured with little concern or knowledge of the impacts on local communities, or whether it contributed to deforestation.

That is why our Brooklyn Bridge Forest design will source wood from a sustainable forestry operation managed by the Uaxactún community in Guatemala’s Maya Biosphere Reserve. The community, in partnership with Wildlife Conservation Society, has been widely recognized for their successful forest conservation, which includes certification by the Forest Stewardship Council.

Rather than clearing the forest, the community practices low-impact timber harvesting, using small-scale equipment to remove just a few trees from each area while rotating harvest sites. They replant thousands of seedlings and leave the selectively harvested areas untouched for 40 years. After over 100 years of continuous community use, the community has maintained its intact forests and wildlife is flourishing. 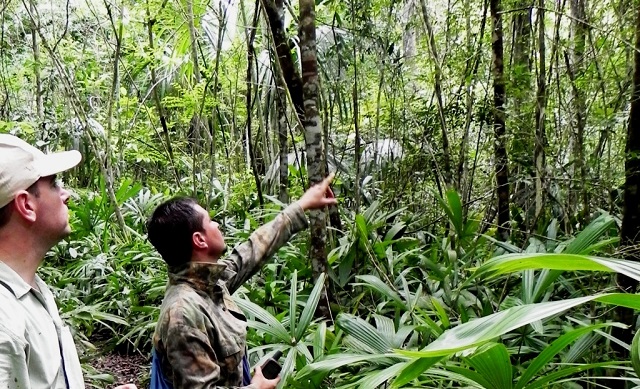 A major contract to supply sustainable timber, like the Brooklyn Bridge Forest project, can have a considerable impact on the people of the Uaxactún community and the forest on which they depend.

The Maya Biosphere Reserve is threatened, like many tropical forests, by the expansion of commercial agriculture. In this case, groups of cattle ranchers from outside the reserve want to illegally clear the forest for pasture. They are often well-funded and even armed, and will typically seize de facto ownership of the land once they have cleared it.

Currently, the forest’s only defense is a relatively small group of community members, NGO workers, and a handful of guards to patrol an area the size of all of New York City. The sale of sustainable timber would pay for more forest patrols, firefighting, satellite monitoring and research as well as community medical facilities, schools and livelihoods for the people of the reserve.

Sustainable Supply Chains for Timber and Beyond

Rebuilding the Brooklyn Bridge with sustainable timber will be a major feat, but to reverse the global tide of deforestation, the solution needs to be bigger than a single project.

In 2019, the world lost a staggering 3.8 million hectares (9.4 million acres) of tree cover in tropical forests, driven largely by the unsustainable production of wood pulp, palm oil, soy, beef, and other commodities. Not enough consumers appreciate the role that their demand plays in incentivizing the clearance of forests, and there are few easy avenues for people to advocate for more sustainable commodities on a large scale.

Cities4Forests is seeking to change this through its Partner Forest Program, which connects cities with specific tropical forest areas and communities in support of forest conservation and restoration strategies for their mutual benefit. These “local-to-local” partnerships can offer educational value beyond their immediate impact in establishing sustainable supply chains for timber, cocoa, coffee and rubber.

For the Brooklyn Bridge Forest project, this will involve cultural and education programming in New York City and with the Uaxactún community that can link people across geographic boundaries and help generate interest and empathy that supports environmental and cultural sustainability.

Partnerships for forest conservation and restoration have never been more urgently needed. Deforestation increases the risk of novel diseases jumping from wildlife to humans (as the virus that causes COVID-19 did). Reducing deforestation, especially through sustainable community management, is also a powerful lever in the fight against climate change.

Cities are entering a rare window of opportunity to “build back better” as COVID-19 economic recovery dollars are directed toward infrastructure projects. Forest-dependent communities, for their part, need urgent support for their conservation efforts as poaching and deforestation have reportedly increased as the pandemic preoccupies governments.

You can help this effort. Support the Brooklyn Bridge Forest by sponsoring a wooden plank, which funds 18 acres of tropical forest conservation. If you are a city-dweller, ask your city government if they have a sustainable procurement policy for timber or other commodities. With this victory and your support, we can begin to reimagine more of our public infrastructure as landmarks for forest conservation.

James Anderson is an Associate II for the Natural Infrastructure Initiative at World Resources Institute.

Scott Francisco is Founder & Director of Pilot Projects Design Collective and a Co-Founder and Director of Cities4Forests.

Paige Langer is a Research Analyst for the Forest Program and the Cities4Forests Initiative at World Resources Institute.